The Maker Movement is much more than just a space to provide students in the K-20 environment with a tricked-out place to “do” what they are learning.  A Maker Space without the mindset is just another static museum installation.  The pressure on schools, currently, to install a Maker Space complete with 3D printers and technology to rival NASA does not address the making at all.  The space is just a place before you gather the people with the maker mindset to facilitate within the space.

What does that look like? In most schools, it means looking around for staff who are “makers” and are naturally curious about the space and tools and match them with the space and students to see how the relationship works out.  Before teachers adopt making into curriculum teaching, they may need a chance to see what it looks like in an after school or lunch time club setting. The road to adoption for many staff may be in seeing the learning that goes on in the space before they imagine it working in a particular unit.

I am currently reading and working through the ideas in Creative Development by Robert Kelly.

In a series of 5 workshops held here on campus by the author, we are learning about creativity, innovation, design thinking and collaboration and what each concept looks like in the future of education.  It is an exciting time to think what is possible if the learning is experienced by students at the hands of creative facilitators.  Although these notions won’t be adopted immediately into K-20 classrooms, the more we know about each concept and how to recognize it in teaching and learning, the better chance we have to be moving towards adoption.  More on these key concepts in upcoming blog posts.

Is coding the new literacy? Even if you are not sure of the answer to that big question, you can begin to introduce your elementary classroom students to programming.  Some of the resources listed need technology and some just need your time to set up some centers to spark interest from your students.

Scratch Jr. as a website or an app is a great way for students to start to understand the “if you program this, then that happens” type of logic that is necessary for programming.  Some may not even catch on that they are learning actual programming due to the game atmosphere of this app.

Kids Get Coding is a series of books aimed at the K-3 grade level.  Each book explains one aspect of computer programming that will provide a foundation for students to begin to code. They also include tips about being a good digital citizen and how sites collect information about your identity to tailor sites to your needs.  It also cautions students about the importance of privacy and what information sites are looking for that you may not want to give out.  Although each book is only 24 pages long, each has a table of contents, and index and clear definitions of terms that are used in each book.  A website gives access to further content by book title to help educators further work with each subject area covered in each book.

Robot Turtles and Code Master are both board games that don’t need any technology to run them. Robot Turtles is for very beginning programmers and teaches logic as a introduction to the steps needed for good coders.  Code Master is a one player game and will challenge you students to code instructions on the board rather than into an app or website.  Both good options in a classroom to spark an interest.

Introducing the notion of coding and computer programming into your classroom is not as daunting as it may seem.  There are many books out now to challenge students to learn the rudiments of coding by playing games or working through actions of a robot or character.  Start with these resources and work through this next level thinking with your students.

I admit it – doing the Dinosaur Stomp with a number of grade three students mid-morning is an excellent way hit the reset button on your day.  These “movement breaks” in elementary school (as in every sedentary environment) are good for bodies and brains and the body-brain connection.   Remember brain gym.

I think we are past the time to recognize that the health of our students is partly our responsibility as educators because we see them for so many of their waking hours.  Elementary school is a natural place to see the positive rewards of extra movement in your classroom.

Instead of an app this week, I would like to suggest the website  GoNoodle.com. A site where you can incorporate movement into your class while not skipping a beat teaching curriculum.

GoNoodle begins with a video entitled GoNoodle 101 but I don’t think you really need the guidance.  Preview a few videos and choose something to your liking.  Strategically place the video during your teaching and voila – movement and learning. 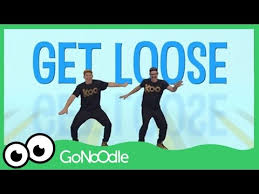 Lots of math songs and some American content but I still think you can bookmark the site for a quick change of pace in your classroom.

Today’s post is not about old schools but about an event that the whole Maker World took note of in 2012 that changed the way people thought about at least one boy’s education.

The event is captured in two YouTube movies that capture exactly what it means to be a nine-year-old inventor. The first movie, by Nirvan Mullick, traces the cardboard arcade designed by Caine Monroy in the front part of his dad’s auto parts shop in 2012.

Here is making at its finest.  Very little adult interference and time to work away at a continuous project. Caine used what was around him, saved money for luxury add-ons like the calculators and tenaciously pursued his design ideas.

Nirvan changes Caine’s life by validating that kind of entrepreneurial spirit and creativity.  The second movie, shows the evolution of Caine’s Arcade from an event to a movement, creating a scholarship fund for Caine, a foundation for making called The Imagination Foundation and an annual Global Cardboard Challenge.

This Huffington Post article , captures some of the most important changes that came about because of Caine’s Arcade. “The impact on Caine has been profound. Caine’s dad told me that before the film, Caine was behind in reading and that his school considered him “slow” and wanted to hold him back a year. After the film, Caine became a poster child for gifted children everywhere — his grades improved and he even stopped stuttering. Caine began to refer to himself as an engineer and a game designer.” (Huffington Post, June 9, 2014)

Caine has become a hero of sorts to the underdog of learners who finds a way to exercise his potential in ways a school could not even imagine.  Wouldn’t it be wonderful to present some learning opportunities like Caine’s Arcade to students in every classroom?  We may be able to unlock so much potential in so many students.

Visit Caine’s Arcade site and enjoy the experience.  By the way, Caine is 13 now and officially retired from the Arcade.  How time flies for any entrepreneur.

A blog for educators, researchers and other thinkers by Sarah Elaine Eaton, Ph.D.

Lost in a Great Book

A blog about books. Oh, and some other stuff too.

Blogging on innovative technology in education from the Doucette Library

Blogging on innovative technology in education from the Doucette Library